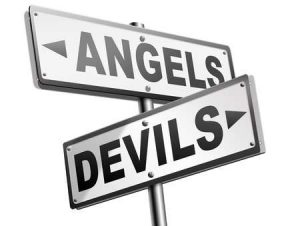 It was rather unusual of me to watch Television early in the morning. But we had guests and one of their boys had left the screen on. I see the image of a young man, killed by religious fundamentalists, with a single stab into the heart. A valuable life, snuffed out, just like that.

My mind travelled to a day, a few years previously. That day, in television, I had seen a group of men cheering and gesturing in joy. They were all smiles. All of them were convicted criminals. What I saw was them celebrating the unexpectedly light sentence that they received. They looked satisfied and at ease, as if their consciences had been vindicated. I surmised that all of them derived a sense of accomplishment from the awesome duty that they performed- for God. Their God.

A few years back, a group of them had stopped Professor David, a college teacher, while he was driving his car to work. The teacher had allegedly defamed and disgraced their god by his writings. They dragged him out of the car, beat him and hacked off his right hand with swords. Then they must have gone off and celebrated, like they did now in front of the courtroom. The teacher’s wife later committed suicide.

I turned away in distress. It was difficult to watch the news nowadays, either in the newspaper, or elsewhere. The media had become all pervasive and it was becoming difficult not to face reality. The thought of the media reminded me of the press conference that we had that day, in the hospital. It was regarding the second double hands transplant that we did one month ago. He was an Afghan national. So there was some interest in the media. The hands were donated by a construction worker named David, who had died in a traffic accident.

Morning we had gone to his room. He was offering namaz with his transplanted hands. We waited respectfully while he prayed to God. He was a deeply religious man. He was a Captain in the Afghan army. He had lost both his hands in a mine blast three years ago. He got up and greeted us effusively. He gave ‘namasthe’ with his deep brown transplanted hands. The colour contrasted quite starkly with his otherwise relatively fair body. A sharp zigzag line of demarcation marked the middle of his forearm where the dark joined with the white. We asked him to get dressed and come for the press briefing.

The room was full of media correspondents from across the country. Mounted cameras arranged themselves like pointed kalashnikoffs at the podium where Mohammed Khan, the patient was seated. Some of us sat around him. Dr. Subramaniam Iyer, our surgical team leader and head of Department gave a presentation on the technical details of the surgery. But the star of attraction was Mohammed Khan. Questions flew like ballistic missiles. Even we didn’t know all the details. He spoke rapidly in ‘Pashtu’, interspersed with broken English and Hindi. The translator struggled to keep up with his flow of words.

He was the leading bomb diffusion expert in the army. He had diffused over two thousand bombs and mines in his stint in the army.

“That day I inactivated around thirty bombs. The last one was a remote controlled one that was designed to take off my hands. As soon as I touched it, someone set it off. It must have been an inside job.”

I sat very still. Everyone listened intently. This was news. We were under the impression that it was an accident.

“Later the leading terrorist organisation that was fighting the government gave forty lakh Afghan rupees to the person who took off my hands.” He continued. This was sensational. I tried to take this in without any change of expression in front of the cameras.

“What will you do after you go back?” Someone asked.

“Will you go back to the bomb inactivation squad?”

“Of course. That is my job, isn’t it? I am the expert; I have to do it.” He said without hesitation. The words carried conviction.

I realised why the British, the Russians and the Americans found it impossible to subdue and control the land from which he sprang. If his people had to have salvation, they had to find it themselves. The battle was inside- internal alone. A good many major battles were.

“Your new hands are much blacker that you are. Does it bother you?” One reporter asked.

“What do you mean? These hands have given me new life. I like them. I love these dark hands. I like them more than the hands that I lost. They are a gift from the relatives of the dead man to me. May god bless them.”

The wife, daughter and the brother of the dead man were present in that room. Officially we shouldn’t reveal the donor’s identity. But the preceding media glare had made all these considerations superfluous. They had wanted to come and see the recipient. Mohammed was not aware of this. We told him. He jumped up from his chair and approached them with folded hands. The daughter took the hands that had previously belonged to her father in hers. Camera flashes went crazy.

One of the reporters from a local newspaper that I knew was sitting beside me.

“This is a religiously sensational surgery.” He told me. I looked at him in surprise.

“The hands were donated by a Christian family and taken from a Christian. It was attached to a Muslim. The surgery was done by a team led by a Hindu Iyer.”

I smiled. I had never thought of it that way.

“And there is more. It was in this same land that religious fanatics had brutally cut off the hand of one David. Now another David has donated both his hands to a Muslim.”

Indeed. These reporters never miss these things. I looked at Mohammed’s hands. He was shaking hands with David’s wife now. She was tearfully looking at the hands.

Suddenly I developed a sort of X-ray vision, a kind of omniscience. I could see the tendons, nerves and blood vessels beneath the dark brown skin and how they seamlessly blended with their counterparts in the upper forearms beneath the fairer skin there. I looked around. I could see inside other people- the liver, the kidney, the colour of the blood coursing in their veins. They were all identical. But I could also see the cells, antibodies and molecules of the immune system inside each person- ever ready to fight invaders and any organ transplanted from any other person. This immune system was relentless and will forever try to kill off David’s hands that were now lodged in Mohammed’s body. Powerful medicines had to be given lifelong to prevent this, and that could lead to problems.

I gazed inside people’s heads. Nestling inside their craniums were billions of neurons, tiny electrochemical hubs, humming with activity. Many were secreting joy, love, peace and an abiding desire and ability to care for their fellow men. But I could also see currents of thought- dark, ancient and mysterious that induced humans into violence, intolerance and hatred.

I saw the struggles that lay ahead for better medicines and more fruitful procedures. I could see tissue engineered hands and bionic hands that could be connected to nerves. I saw synthetic hearts and modular liver-replacing machines. I also had an inkling of the long battles that were in the waiting between the forces of kindness and reason and the devilish forces that were part of human nature. These vestiges of our murky evolutionary past will pose a barrier to our own survival. But our better natures may prevail. I sure hope so. (Jimmy Mathew)