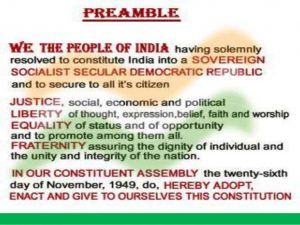 Well, Guys, I need no reason. I have a father and mother. And I am proud of them. And I love them too. Fortunately for me, there were no reasons not to, and there were enough, that makes me want to.

I love India because I was born here, and the country has treated me well, considering many things. Patriotism is a visceral emotion, like the love for a childhood friend, despite his or her many flaws.

It is not really rational, and need not be so.

As social beings, we need a framework to live. In modern life, systems are so complex and inherently dependent on the co-operation of tens of millions of people. So much so that we are almost like ants- or termites. We are a superorganism.

In the recent floods that are now ravaging the state of Kerala, I am impressed by the will, planning, scientific thinking, and the fairly efficient deployment of systems by the machinery of governance, to mitigate the disaster. It applies to both the centre and the state. When there is a need, we are able to put aside our differences.

Not having a country is horrible. Ask any refugee. It is worse than being orphaned. Being orphaned is an individual calamity, while statelessness is when your entire sense of self, and the human yearning to transcend death through the continuity of your people and culture is mercilessly expunged. It is utter hopelessness.

Other than these foundational issues, are there any real, objective reasons to be proud of our country?

Yes. I believe there is.

India, as a single state, was born in 1947, after the British left us. There are many, who say it was the British that brought modernity to India. I don’t think we need to buy that argument. Look at China. It was never under European direct colonial occupation (though it came close). And it did well, harnessing the fruits of European scientific revolution in its own way. We were a rich country, and the British used us for their own ends. By the nineteen forties, we were as impoverished as the Africans, Malaysians, the people of the Middle East and an assortment of similar ones that included Thailand, Indonesia, Pakistan and Bangladesh- all were under European colonial occupation, and freed almost at the same time.

There were many reasons why colonialism died. But one of them was the Indian Independence movement, spearheaded by Mohandas Karamchand Gandhi, Jawaharlal Nehru, Sardar Vallbhbhai Patel, and countless others, whom the Indian people supported almost unanimously. This is something to be proud of.

For the first time in the world, a freedom struggle against foreign rule was won by a revolutionary new method- non-violent agitation. Wasn’t that amazing? Believe me, it started a trend.

When I realize that in 1947, we had one person-one vote, and all citizens were considered equal by the state, at least in principle, and a black person in USA got their just civil rights as human beings only by the end of the nineteen sixties, I have a serious problem keeping the hair on my body from standing at attention, as though listening to ‘jana gana mana’, being sung at the local cinema, before the movie “Apocalypse Now’.

The most astonishing fact was that we were a fully functioning democracy for all these years, barring a short two years in the middle of the seventies, when an emergency ordered by Indira Gandhi suspended constitutional rights. No one else who got freedom at the same time as ours could do it. Look at the countries of the Middle East, Africa and others. Malaysia and Indonesia ended up as sham democracies.

A comparable country, China, though economically powerful, is a brutal dictatorship. There is no Google, face book, Whatsapp or even Wikipedia, for heaven’s sake- I mean Marx’s sake. Not exactly my favourite way of flourishing, if you will excuse me.

If thousands of young men and women, single children of their parents, die at Tiananmen square, they stay dead. Even their pale ghosts can’t haunt the history books.

When Tibet is occupied, it stays that way. The Chinese flag flies atop every house, and the premier’s photo is on every wall. People’s leader- one cannot run away from Big Brother. No, sir.

Till the nineteen eighties, Pakistan was economically as good as us, or better. But it was never a comfortable democracy. Then General Zia actively encouraged Islamism and Political Islam, and honed it into a weapon that he could use against his enemies.

This kind of weapon naturally, had a life of its own. It grew into a monster and ate him up. It ate up a lot of things. Leaders, Democracy, Lives, Economy, Dignity, basic rights. And much else, besides.

We never went down that path either, and I am really proud of that.

From a little more than quarter billion in 1947, we grew into 1.3 billion- an increase of almost five times! We were starving then, and believe me, we have enough food now.

In fact, we have enough of almost everything basic, if only we could find a way of distributing it more equitably.

So, On the whole we have done well, and I am pleased with that.

But challenges remain, and under the thin veneer of constitutional morality, as delicate and fragile as an apple’s skin, we are a seething cauldron of ancient loyalties. Till now, we have kept the skin intact.