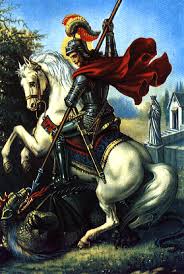 It was the grand opening. The consecration of the church at Kochi. It was in the name of the warrior saint atop a horse with a ‘thrissool’ in his hand. Rome decreed recently that he was no longer a saint. They didn’t like his “thrissool” or his tendency to attack saints and dragons.

But in Kerala, nobody could banish the saint. How can a saint who has intervened to god for generations on the behalf of the Syrian Christian Nasranis of Malayalam suddenly pack up his trident, and disappear with his horse? We prevailed against Rome in our own sneakily obstinate ways.

This thought, along with the wonder invoked by the magnificent edifice bedecked with thousands of lights burning up zillions of watts of electricity per hour, filled my heart with pride. We were a force. We had a hotline to god and Jesus Christ, going back two thousand years to St. Thomas. By some miraculous feat of discretion quite unknown to Jesus, he seemed to have converted only Brahmins and high castes to Christianity. That was the mythic tradition. I am not forgetting that the previous pope said that there “was no evidence” that St. Thomas ever visited India. “Then where is the evidence for god?”- We had retorted. It was all belief, traditions and customs. And all that. Please don’t talk bullshit.

I entered the courtyard. Even the beggars looked resplendent. Many were familiar to me. One man who was always seen in dirty shorts now had a clean pair of pants on.

…Praise the lord… He said. Usually, he bleated out …Saaaa..rr… in a plaintive voice. Another beggar lady was in an almost decent sari.

A lunatic with dirty beard stood outside. He had a peculiar tangle to his wild hair.

I saw what he meant. The crowd was astonishing. The entrance was milling with people. I saw my neighbour Narayanan. …The saint is our favourite against snakes. He is even better than the local snake temple at this…He said. I felt proud. There were Hindus, Muslims and Dalits praying to him without getting converted for hundreds of years.

The ceremony was deafening. CCTVs sprouted in profusion. Biriyani was for thousands of people. The cost of the consecration was estimated in tens of lakhs. A church insider told me that the entire new church cost around 40 crores. I felt proud and happy.

After some time, I got out and walked to the old church, still standing in one corner. It stood, alone and forlorn, away from the lights.

The lunatic was standing in front.

…Cant get in….I cant get in….He said. Then he gestured helplessly with his open palms. There were wounds the size of walnuts on both his palms. The blood glinted silvery from the far off lights. Then I realised what was peculiar to his wild hair. It had a crown of thorns.

The sound of hoof beats distracted me. I looked inside the old church. An armed horseman mounted on a white steed was galloping round and round the tiny church, as if trying to escape. Suddenly he burst out of the window and rode out into the night, hoofs thundering. The spear had morphed into a gigantic pen and it was poised to attack. The snakes, invisible yet discernible, writhed inside me. I cringed in terror.