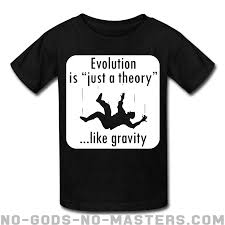 A communist legislator, in Kerala, recently told publicly that he has not given vaccines to his children. He added that ‘he was forced to support’ the recent MR vaccination drive in the state, part of a WHO programme aimed at eradicating measles and rubella. At the time of saying this, his own government was desperately urging the public to co-operate – it was essential for the health of the people.

Meanwhile, our beloved Minister in charge of educating young people over the whole of India, made a confident assertion. “The theory of evolution is wrong” He said, out of the blue. Just like that.

It definitely made headlines. Foreign media loved it. They, from time immemorial, have loved to see our great country as a land of ignorant, bare bottomed defecators. The ludicrously confidant fart from the honourable minister was lapped up (or inhaled in, if you please) with squeals of pleased delight.

The minister stuck to his sphincters, despite opposition. “All over the world, the theory is being challenged.” He said. “It is wrong.” He re- intimidated. Re- iterated- Sorry. He was no moron- he was an IPS. He has an MA and a PhD. He apparently, holds an M.Phil in Chemistry.

I mean, he was no moron, going by his credentials.

The fact is that evolution is true. Working at a hospital, I daily see evolution happen. The Methicillin resistant Staphylococcus is a different organism from the one easily killed by Penicillin mere decades back. Human Jaws are shrinking with each generation, and last molar teeth are already vestigial. One need not go into the details of the fossil record, carbon dating, comparative anatomy, and the irrefutable DNA evidence with which we can accurately time evolution. For example, we know that the common ancestor to humans and chimpanzees lived about 6 million years ago. Modern humans are about 200’000 years old.

Similarly, it is a fact that vaccination works. It is among the most important advances in science that makes most of our children survive to become adults. Previously, half used to die.

Interesting. What is it that makes these people hold beliefs that are at variance with the facts?

The communist MLA had made it clear. His wife was a homeopath, and as a rule, homeopaths don’t believe in vaccination. Homeopathy is belief based healing method, and is widely practiced. Her belief was transmitted to him.

Our evolution basher hero, has clearly stated why he doesn’t believe in it.

“Nobody, including our ancestors, have said or written that they ever saw an ape turning into a human being,” the media reports the minister as saying.

So that is what it is. He believes that our ancestors knew everything. An ideological stand. It is no wonder that he became a minister.

Once a belief is established, there are a variety of ways by which our mind will hold on to it. Michael Schirmer, on who has done extensive work on belief, says categorically:

“Beliefs come first, and the confirming evidences for the beliefs are collected later.”

So, it is not like we rationally debate and review the facts and evidences and then come to a conclusion. We come to believe in something by a mental process that involves facts, our emotions, our psychological predispositions and most crucially, on our dear ones, friends, peer group and the time and place that we live in.

The first comment has a link to a story that illustrates how beliefs are made.

People who cant do that are called dogmatic.

Look at our Government. The people of India have given a huge mandate to this one, for the sole purpose of good governance. That is what they had in mind when they voted for the party.

It is clear that many policies are good. Corruption is down. Some fundamental things are right.

But what is going wrong is dogma. We simply cannot afford ancient ideological baggage that rebels against constitutional governance- for whatever one may think, we still is a desperately poor country with a large proportion of us still relieving ourselves out in the open.

A land of bare bottomed defecaters, in other words. We have to evolve out of it, so to speak (Jimmy Mathew)