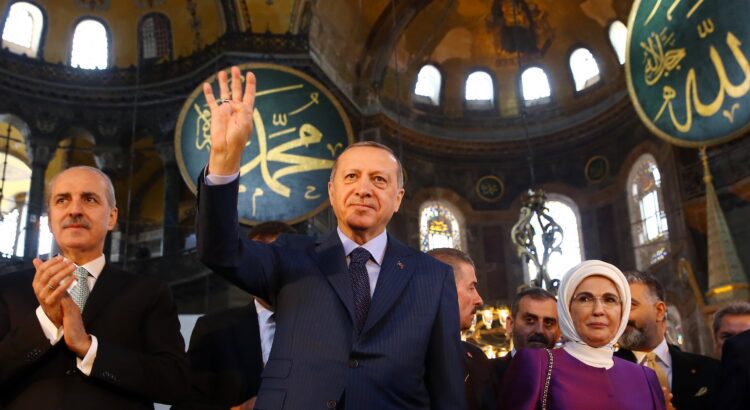 The picture shows Erdogan, the autocratic president of Turkey, opening the Hagia Sophia Mosque to prayers.

What a proud moment it must be for the Turkish people who support him!

Well. I can see many are not thrilled. That means you are a Libtard or a pseudo secularist. Look at it from the point of view of a man (Or a woman) in Turkey, passionately proud of his cultural heritage.

His (hers) ancestors were once, a part of the enormous Ottoman Empire, and ruled over most of the Muslim world. The emperor was the Caliph, a religio political god-like figure. It was the ideal Islamic form of rule.

The Roman Empire was the Christian counterpart, and a precursor to the western civilization that we know today. Powerful and hegemonic. Constantinople was the capital of the Eastern Roman Empire, and the Ottomans had captured it in genuine battle. Constantinople became Istanbul, and the church of Hagia Sophia became a mosque.

The western powers were relentless. In the first world war, they beat Turkey. Turks massacred Armenian Christians by the millions, but one should see this genocide in context. Turkey became a slave to the west.

After Independence, a greatly reduced Turkey tried the secular Republic path, goaded on by the pseudo secularist Musthafa Kamal Pasha, aka Ataturk. This kind of liberal democracy and the constitution was an imposition of western values. Values that was quite foreign to the medieval Islamic ethos of the Turks. And the conversion of the Mosque of Hagia Sophia to a museum was an unwarranted act- an abomination.

Now, things were being set right. The foreign constitution is amended and at the helm is a man who understands the cultural heritage of Turkey- its sacred Islamic heritage. The sacredness makes it sort of unquestionable- and those who oppose, are anti-nationals.

Please note that I am viewing the whole thing from the point of view of a genuine cultural supremacist of Turkey.

Ram temple. How genuinely proud many of us will be, when it finally opens in Ayodhya, just before the elections.

Look at China. What we see is not communism. The economy is capitalist. What we see is a Nationalistic Dictatorship and a genuine expression of Chinese cultural supremacy. They have an unbroken 5000 year old culture. Humiliated and forced into a drugged stupor, with smuggled opium from the west forced down its throat at the point of a gun by the imperialist west. Later, when it tried to wake up, the western powers allied with Japan to force it into a brutal surrender. Why shouldn’t it try to genuinely express its culture?

Human nature might lead us inexorably into a global nuclear war. It may also environmentally destroy the planet because of our inability to forge a common purpose.

Some may argue that the idea, that Humanity can have a common destiny needs to be pursued- that we should try to have values that transcend cultures.

But then, we might be too primitive for that. We may not be able to do it. (Jimmy Mathew)