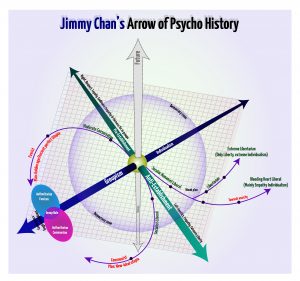 “You bloody intellectuals. You have no clue how the world thinks. Why do you think Trump was elected then? The media tried to pull him down and mock him at every opportunity. Still he won. He had the support of the common people of America.”

The vehemence of the response threw me a bit. You would think that he was a republican and an American. But he was a fellow citizen- an Indian.

Many others jumped into the battle. There were supporters for him too, and they called us pseudo secularists and ‘pseudo intellectual leftist assholes’. That made us very angry, even though I couldn’t really get what those comments really meant. We called them ‘cultural fascists’ and ‘dictatorial morons’.

We had ruffled feathers. Some neurons fizzed and sputtered. Adrenal cortices secreted a bit of adrenaline and noradrenaline. But there was no blood. There were no prisoners. It was nice. But did we achieve anything? No territory was won, and we captured no soldiers as slaves. As far as I could see, we had strengthened our own positions and belief systems. But there was no sign that the other side was getting any message.

We see the battles now. Everywhere we look. From the screens- handheld, on the desk and the gigantic ones on our walls. Words leap out and attack each other on every scrap of newspaper or a magazine. We don’t need corner shops, staged meetings and billowing mikes anymore. The clash is in the air, in the form of coded but invisible radio and microwaves. Human thoughts pervade the very air we breathe. And we see the blades glint and incisors bared in anger.

The great clash of civilizations is a battle of world views and also- against ourselves.

Let us not fool our own minds. As we have seen, the world is now a relatively peaceful place. The network of trade and reciprocal exchanges bind us in its grip. The global village is in our backyard. But the powerful gods of war are waiting in the wings. The real God has negotiated an uneasy peace.

We remain for the moment- nation states frozen in time- neither expanding, nor falling apart. Is it largely due to the threat of apocalyptic nuclear weapons whose buttons no one wants to push? But it also could also be due to a genuine evolved collective feeling of reluctance to unleash our darker side.

If it is so, the Clash of civilizations that is coming, indeed is on in full vigour, is going to be a battle between human ideologies- belief systems into which religions previously gelled seamlessly, but now subsumes them.

An ideology is a world view which is a prescription for how the society is to be run. Religions are ideologies. Right now, the clash is between broader world views. Religions are only a part of them. An ideology has at its core, a prescription for correct behaviour of a person in society. It lays down what is to be praised and rewarded and what is to be punished or discouraged. Just like when we were a small tribe of a hundred people. Morals are the fuel on which world-views are run.

The traditional axes of ideologies are left- right. Left wingers or rebels seem to be on one side and rightists who are conservatives on the other.  But a careful look says that the actual thing is more nuanced. It is shown in the diagram below. It is titled, very humbly and self-effacingly, Jimmy-chan’s Arrow of Psychohistory. Hope you like the name.

The main battles in ideological realms in the present day are fought between conservative forces and the universalist liberals. According to humble little me, this is the “Clash of Civilizations’. It is also a battle inside us- a mental war.

A war of morals

The main principles guiding them are differences in the perception of right versus wrong. Let us re-visit the morals of Jonathan Haidt.  He has shown brilliantly, that they account for most of human moral behaviour and decisions:

Care/Empathy– the mental system that automatically sympathises with suffering. It makes us want to protect vulnerable or marginalised people from suffering. We feel their pain and want to reduce it. Liberals are indiscriminately empathetic. Many may be activists who fight for victims. They might err on the side of over-protecting the minority or the marginalised, even at the cost of disadvantage to the majority or mainstream. This moral aspect is strong among liberals.

Conservatives also have this empathy. It could be very strong, especially for members of their group. But their empathy is not as universal or indiscriminating as that of the liberals. Conservatives may be slightly more empathetic to their own group, due to their emphasis on loyalty as one of their chief morals. We will come to that.

Fairness/reciprocity: Everyone wants to be treated fairly. For liberals, it means equality for all. For an extreme liberal, it may mean absolute equality, while most are satisfied with equality of opportunity. Liberals want the government to enforce this. They want the government to provide universal education and health care. Socialist liberals definitely want the authorities to levy more tax on the rich and give it to the poor. The big industry and capitalist corporations have to be reined in. They bleed the poor. Universalist liberals want the rich to give up their money and the powerful to shed the privileges and distribute it more fairly.

The Conservatives also are concerned with fairness. They see it a bit differently, though. The better you are and the more you work, you will gain money and status. That is fair. Taking it from these people and re-distributing power and resources – beyond a point- the conservatives view as unfair.

Liberty/Individual rights– This is the main moral dimension that is responsible for the left-right axis itself. This is one of the chief concerns of liberals, and especially libertarians, whose focus is almost only in this dimension. (libertarians are against government control of almost anything, especially trade and business. They are highly Capitalist, individualistic liberals.) Liberals are more aware of rights than duties to the society.

The above three dimensions of morality are what liberals mostly live by. They are a liberal’s distinct character. Most psychologists, as mentioned previously, used to think that the empathy and the fairness aspects were what morality was mainly about.

The three described below are a breakthrough. They show light on conservative thought, and lay bare why academicians, journalists and many liberals are often surprised by the support people give to certain causes, and to leaders like Mr.Trump, or the loyalty that yogis, swamis, mullahs, community leaders, certain divisive politicians and evangelical pastors often get.

Authority/respect– certain people and things are thought to deserve respect. Your father. The National Anthem. Do at least some teachers deserve respect? What if some mothers are not very respectable? Do we show our mother some respect, even if she doesn’t deserve much? Conservatives think it is very important. Liberals don’t think it is.

Loyalty/ in-group love– This is a serious moral dimension. One can deny its existence till one is blue (or red, if you are communist) in the face. But it is there. Would you support a family member unconditionally? You may be very critical of your country’s policies. But would you badly abuse your own country in a foreign television channel? Why not?

Conservatives like loyalty. Duty automatically follows from loyalty. Does in-group cohesion lead to other-group intolerance? That may happen, though it need not. Liberals don’t think loyalty is important enough at all.

Sanctity/ Godliness– This is one aspect of the whole moral scene that all types of liberals verbally reject. Some things some may consider sacred. Many conservatives believe in God and religion, though not all.

Scientists have found that humans naturally think about a progression of sacredness, starting from God or godly, down to evil, despicable or degraded. You sin and become degraded. One’s body is sacred to a degree. Do the right thing and become exalted. Religion is based on this premise. Conservatives take this aspect seriously, while, most liberals would throw this out from their conscious calculations. This is a book about God and the mind of man. I would strive to show that this particular moral dimension is the staunch basis on which all world views rest.

Right now, at this point in history, I said, that the main axis in which the battle of ideas happen is in the Conservative- Universalist Liberal axis.  It includes India. Fifty years back the war was on more on the Conservatives versus the Socialist liberal/ communist axis. After the death of the Soviet Union, the axis has shifted to the conservative-universalist liberal battlefield.