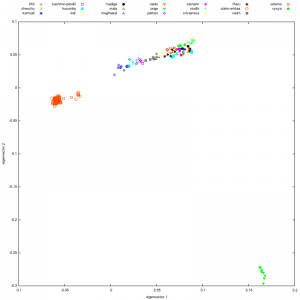 “They (Lalji and Thankaraj) did not want to be part of a study that suggested a major west Eurasian incursion into India ……would be politically explosive. However, we knew from our genetic studies that a real and profound mixture between two different populations had occurred and made a contribution to the ancestry of almost every Indian living today, while their suggestion left open the possibility that no mixture had happened. We came to a standstill. At the time I felt that we were being prevented by political considerations from revealing what we had found.”

I am a big fan of banned books, films and memes. It is very interesting to see what offensiveness people saw in them, that they could not see in hardcore and degrading pornography, and media showing exceptional violence and exhortations of extreme sectarian hate.

For example, I have read Salman Rushdies’s ‘Satanic Verses’, and ‘The last temptation of christ’ by Nikos Kazanzakis. Both greatly amusing.

But I have read Wendy Doneger’s banned book, and I was greatly incensed. How can anyone, except an Indian- that too, one sufficiently steeped in the ancient propagandist lore of this country- dare opine anything about us, escapes me.

As a staunch nationalist, I want to extend our strident criticism and suppression of anything that is against the newly moulded integral ethos of our country, not only to art, opinion and literature, but also to hard facts, research methods and lines of enquiry.

Because, let us face it, facts stink. Cervantes, in “Don Quixote”, quotes the following couplet:

“Eat not garlicke, chew it not.

For it makes men, drinke, thinke, and stinke…”

Similarly, facts definitely make one thinke, and ideas built on falsehoods and half-truths might stinke, on exposure to facts. So it is dangerous and illogical to think (ahem), that facts and the search for truth are innocuous. Even history, just a sequence of events, is horrifyingly reflective, and is best forgotten. (It is even better to twist it, enough to make it fit our view of the world, or if that is not possible, make it confusing enough, so that no one can hope to understand it at all.)

Look around us, for instance. We see humans of varying physical appearances. Towards the south of the country, and towards the east, many are dark skinned. The extreme north easterners seem similar to the Chinese, unlike in most other parts of India. The extreme north and west show more fair skinned people, and some show features vaguely resembling Europeans. In forested areas, in the centre, east and south, we see dark people with coiled hair, resembling Australian aboriginals.

When we look at languages, we see a similar pattern. A smattering of Austro-asiatic languages dot the tribal areas, and a sprinkling of sino- Tibetan languages are there in the northeast.

But the major languages in India all belong to two groups- Indo-European and Dravidean. Hindi, Bengali, Gujarathi, etc are all derived from Sanskrit. Sanskrit is a sister language to Greek and Latin. It is from Greek and Latin, that almost all the European languages are derived. (pithah- Sanskrit. Pater- Latin. Mathah- Sanskrit, Mater- Latin. Etc. Dwaya- 2 in Sanskrit. Duo- Latin. Linguistics and historical linguistics is a field in itself. Suffice to say that there is an entire science behind it.)

The other major language group is Dravidean. Thamizh, Malayalam, Kannada and Thelugu belong to this group, as do many other languages. They are mostly confined to southern India, but interestingly, is still spoken among isolated groups in the east and centre of India. A small pocket of people in Pakistan, still speak Brahui, easily identifiable as Dravidean.

Archeologically, we have the Indus valley civilization, Harappa and Mohan Ja Daro already past its peak by 1500 BC. It was a very advanced civilization, with cities, writing, and no horses. Its language is not deciphered, and we simply do not know who these people were. But it was widespread all over north west India, and maybe beyond, and flourished from 3000 BC to 1500 AD.

Then we have words without things. Suddenly, we have the Vedas. Transmitted orally by Brahmins from generation to generation. Faithfully, and with all the intonations intact. For how long?

About 2500 years. The earliest, the Rig Veda, with its description of four varnas (Brahmin, Kshatriya, Vaishya, and Shudra) is dated at around 1500 BC. Contrary to popular belief, historical linguistics is a well-developed science. Intriguingly, the Sanskrit of the Rig Veda already contains certain elements structurally different from other Indo European languages, nouns and glottis sounds that look as if they are borrowed from Dravidean.

From these broad facts, we nationalists tend to agree on certain facts:

Whatever the appearances, Indians were one and only population, with a common history for fifty thousand years.

Very recently, conquerors came, like the Mughals and the British, and certain intrusive elements appeared. One knows who these are.

Caste system was essentially a product of British rule, and emerged only in the last three hundred years. This was a ploy to divide and rule Indians.

Once we agree on these basic things, which have to be true, we should discard all further evidence and just keep banning things. That is where we went wrong. At least, we should have banned this book of David Reich’s, blocked anyone giving DNA samples of Indians to foreign laboratories, and banned population genetic studies in India.

I think the trouble was the initial confusion with mitochondrial DNA.

You see, by looking at the DNA of present day populations, one can reliably know the route of past migrations of groups of people, including approximate time periods. First they started with mitochondrial DNA. Lalji and Thankaraj from CCMB, Hyderabad, had all the samples. Blood from various parts of India, and different caste groups. The mitochondrial DNA is transmitted only from mothers to daughters, because male sperms have no mitochondria. Mitochondria are small sub cellular organelles.

Looking at mitochondrial DNA, researchers in India found that the population looks rather homogenous- as if there were no population migrations for tens of thousands of years. This was good news. This gels with our vision.

Later, techniques came that could map and see the Y chromosome that only males have. Transmitted from Fathers to sons. This is where there were a lot of discrepancies. Many Y chromosomal markers in India, seemed to have come from Eurasian populations.

Because of the confusion in their findings, our Indian researchers obtained permission from the Indian Government to transfer the samples to David Reich and team for further study.

This was a mistake. This should never have been allowed. The findings are indeed, anti- national.

For one thing, most people in India, are the result of a huge populations mixture, from two ancestral populations. We can call them Aryans and Dravideans, because the linguistic evidence agrees with the findings, but David Reich clearly states in his book, that due to the insistence of the Indian colleagues, the terms were kept as ‘Ancestral North Indians’ (ANI) and Ancestral South Indians (ASI).

There are more interesting things. ASI or the so called Dravidians are not a pure group! The ASI is a mixture of Iranian farmers from the mehrgar civilization of the eastern most part of the earliest farming community of the near east, and the earliest hunter gatherers, the migrants from Africa that came from along the coast and reached India 50000 years ago. That means there was a massive migration of Iranian farmers from the region of Iran 9000 years ago!

Not one, but two migrations!

That is not all. The ANI, was not a pure group. They were a mixture of Steppe Indo- Europeans and the Iranian farmers, who later migrated to India. Heh, heh.

Modern humans originated and migrated out of Africa in various waves. One of the earliest came out, went along the coast and reached Australia. These people lived with stone age technology for a long time. They were probably hunter gatherers.

Other groups had gone to other parts of Asia and Europe. Farming was invented in a massive scale in Middle east and china at the same time. A part of the Middle east group moves to India an copious waves, mixing with hunter gatherers here and forming the ASI around 9000 years ago.

The Yamnaya, a very interesting group of pastoral cattle herders from central Asia domesticate the horse; build fast chariots after they invent the spoked wheel and migrate in waves out of the steppes of central Asia in 2500 BC or so. They go to Europe.They speak Indo European. A part of them mixes with the Iranian farmers to produce the ANI.

The one interesting feature is the caste break up. Yes- caste. Lalji and Thankaraj had blood samples from all the major caste groups. David Reich and group were able to show that caste had become very severe by 1 AD or so, and most caste groups show very little inter-caste mixing beyond that date.

Another thing that emerged very clearly was that the higher up a person was in the caste hierarchy, more the percentage of ANI genes in that person, even within the same state or linguistic group.

This was a scandalous finding, which shows that caste was a reality for millennia.

In fact, the data clearly shows that even before the migration to India, there were castes among the ANI. Endogamous groups that had very little mixing, and some continuous with the present priestly class of India. Varna system, remember? Later, the Jatis of India.

And why did the mitochondrial DNA show contradictory findings? Simple. Because the ANI mixture occurred predominantly from ANI males to ASI females. Other types of mixing were very rare. The implications are not all good.

What is the significance of this type of research? As a patriotic Indian, I find this distasteful. The current dominant narrative was a good formula.

One thing we, as a people, should do is to ban this book too, and prevent the teaching of this type of genetic science to our children.

The other alternative is to observe and internalize truths, and govern ourselves by a rational policy, based on facts and individual aspirations. Consider ourselves as a mix of peoples and tribes, trying to build a nation state based on mutual respect, individual freedom and rights.

But that is too difficult and counter ideological.

In religion, we always give importance to beliefs, and that is a good model, don’t you think?(Jimmy Mathew)