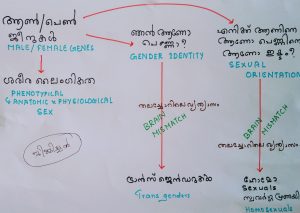 When I was a Plastic Surgery resident in the opening year of this century, pediatric plastic surgeons used to operate and turn any child, born with deformed genitals that were neither fully male nor female into:

Female. That was easier.

Many advocated operating as soon as possible, so that, the ‘grandmother’ doesn’t assign any sex to them. The Surgeons played god.

One can’t blame them. The vestigial notion in Psychology and social sciences, that the human mind was a blank slate at birth, was still prevalent. You bring up any baby as female and she would develop mentally as a woman. Treat any child as a male, and he or she, will feel the same himself. Simple.

At exactly the same time, studies were going on. Hundreds of children similarly treated were entering their twenties and thirties. And..?

This strategy was shown to be a total failure. As young as two years, most of those with a genetic male sex insisted that they were males. They cut off their long hair, threw dolls into the dustbin and refused to wear skirts. When they grew up, most were attracted to women.

Now we routinely get trans gender patients who say that they started behaving ‘queer’ when they were three or four years old.

The facts, as far as we know, seems to be like this:

There are three aspects to a person’s sexuality:

Genetic, anatomical and physiological sex- usually these are same. Rarely, it need not be, and this can lead to intersex states and ambiguous genitalia.

Gender Identity- Who am I? Male, or female? This is a psychological or brain thing. If this is not same as the first, trans-gender states arise.

Sexual orientation- Who Am I attracted to? Usually, this is to the opposite sex. But in some, it may be to the same one. This is the basis of homosexuality. This is a brain thing, and has a large heritable component. Twin studies show the heritability to be above.5, which is quite high.

What seems to happen is this:

When one has a Y chromosome, testes develops in the growing embryo by the 8th week. This secretes testosterone. This hormone makes the embryo grow a penis and scrotum. Without this effect, even an embryo with ‘Y’ chromosome, will become a female by default. Hormonal cascades also seem to act on the developing brain, and it affects the later development of gender identity and sexual orientation. Any slight alteration can make these changes this way and that.

So, trans-genders and homosexuals are best thought of as natural variations on the interplay of these three factors in sexuality.