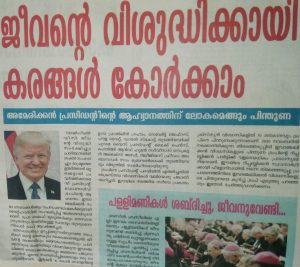 What you see in the picture is a news story about Donald Trump. It appeared in the recent edition of the newsletter, ‘Shalom’. He is seen, smiling enigmatically at the world. Apparently exuding an other-worldly air of spirituality and inner peace. Shalom is a propaganda leaflet of the more fundamentalist type of Christian in Kerala. It is by no means, a reflection of the thoughts of an average Christian here.

When a catholic nun alleged systematic sexual exploitation against a prominent Bishop, it was the average Christian who came out vociferously, demanding prompt and stern action against the Bishop. If he is guilty, all felt, that he deserved no mercy. If he did what she said he did, he is worse than Asaram Bappu, or Gurmeet Ram Rahim Singh.

Shalom has never uttered word about this. Not interesting at all. Happens, you know. Dull and boring stuff.

But it has published this piece, about Trump meeting evangelical leaders in the good old US of A. He apparently harped on ‘pro-life values’. The article goes on to explain, that seventy percent of the ‘really religious’ Christians support President Donald Trump. He has their unfailing loyalty.

Does Trump stand for the ‘right’ values, said to be espoused by deeply religious people all over the world?

Well, Donald Trump does not really represent these values at all. He says America is for Americans. To hell with the world. He is ruthless in the pursuit of money. He hates minorities. Many women have complained of abuse and he himself, on one occasion, is reported to have said,- “I grab them, you know, by their pussy. I just do it, you know. They can’t say anything.” Or words to that effect.

He likes to build walls. America deserves the wealth that it made by plundering native Americans, and using slave labour for centuries. He wants to make ‘America great again’, as if a vastly better and glorious America existed in the past, unknown to history.

One doesn’t get it, at first glance. Don’t we have the following, as Christian values, celebrated all over the world?

Ahem. It turns out we are wrong. These are not the predominant religious values at all. Not of any religion. Modern Moral Psychology, after a painstakingly tedious period of nascence, has found out that these values were always subservient to certain others, throughout recorded history. These rose in prominence only after the scientific revolution and that too, only in modern societies. Traditionally, all human groups had another set of values as their guiding lights. In India, we are a traditional society, and hence these are the values that hold sway.

It turns out that many could support the Bishop, even if he turns out to be guilty. Not to do so may be disloyal. He may indeed be anointed with unquestionable sacredness.

Babas, churches and such could have huge business empires, but it is possible that they need not pay tax. Some may  think it is unfair, but you see, they are too sacred for that.

Gurus can, and should, pour out their dubious wisdom at scientific conferences, and command loyalty and obedience. To hell with fairness, liberty to question and the truth. May you rot in hell for these blasphemous thoughts.

It took a lot of effort for liberal democracy to de-couple politics from religion. When Christian religion ruled politics in Europe, it was called the ‘Dark Ages’. It is clear why that had to be done.  It is a devilishly useful ploy to bring religion back to politics.

We have a lot of supporters in India for Donald Trump. This may puzzle some people. He is only ‘for Americans’, right?

Right. But we do have a habit of liking those who share the same values as ours. (Jimmy Mathew)