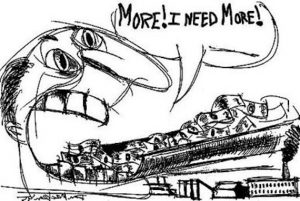 My school friend Sura went to the gulf to escape poverty. He toiled for eighteen years at relatively low level jobs and came back with (what he thought) was a lot of money.

To buy a villa in the most expensive part of the city was his first move. When he purchased his second car, a Hyundai Accent, on top of his Maruti Alto, I rolled my eyes. He explained that all his neighbours had better cars. Most had two, so he had to keep up. The children had to go to the most expensive schools of course, as their friends in the neighbourhood went to the same school.

His father was a whole sale vegetable merchant. He knew the business well. He wanted his son to invest in it. He knew the turf and had the contacts. What was needed was the money. But Sura started a store for designer Jewellery. His wife wanted that. Selling vegetables was not the fashionable thing to do among their circle of high profile businessmen and professionals. What will the Tiger’s Club say?

When the store didn’t do well, he promptly plunged into debt. The EMIs loomed menacingly. His father had prospered in his own business by then. But he didn’t want to help him as he felt that Sura and family had ignored him after coming back from UAE. He felt that his son was ashamed of him.

Materialism is increasing in the modern world. This is not a mere platitude. There is objective evidence for this. When college students are asked what is most important in life, significantly more reply that it is money and material comforts that matter. Twenty years earlier most used to say meaningful goals and purpose in life is more important. One may argue that they have become more realistic. What is wrong with that? It turns out that there is.

Materialism is not the same as money. Money is money. Materialism is an attitude. It has been studied by many Psychologists and has certain features.

Material people believe that possessions will make them happy. They strive to acquire them and it is one of their main life goals. Possessions may include cars, a new house or even a prestigious job. They also are very possessive about them. They envy others who have better things as they see them. They may also be ungenerous- sharing wealth or things is not a priority with them. They want to ‘wow’ other people with their many acquisitions. Some can be very materialistic even though their income is low.

Research on spending habits and life satisfaction has been studied from the nineteen seventies. The commercial interests of big business ensured that it was an important thing to study. The initial assumption was that increased purchase and accumulation of worldly possessions would increase the life satisfaction of people so minded.

By the nineteen nineties, it had become clear that materialism and spending money on things increased unhappiness. It was correlated with anxiety, depression, decreased self esteem and lesser life satisfaction.

Isn’t there something uncannily familiar about these findings? Many so called sages had said the same thing. Buddhism considers possessions as active impediments to happiness.

The hedonic treadmill ensures that we become quickly adapted to new things. Ever wondered how long the happiness from a major acquisition like a new car or a new apartment lasts? Eight to twelve weeks is the answer. Then we tend to buy the next big thing, to replicate the high. Compulsive shopping and buying takes on an addictive quality. It becomes a disease.

Material things are very visual and are obvious markers of money and status. It makes others envious. Since it is the perceived relative income and status that all are competing for, they make everyone buy more, hoard more. More things.  Better ones. Bigger and expensive.  Everyone runs harder on the treadmill. People desperately try to make more money. The virus of materialism spreads. The manufacturers and the advertisers egg us on. The economy is booming, all are happy, they assert.

The increased stress on resources, poison the Planet, the only one we have. Our limited fresh water reserves are destroyed. Global warming threatens to fry us all out of existence in a few generations.

We need to evolve out of ‘more for me’ to ‘adequate for all of us, today and for tomorrow’. But will human nature allow it?

“Nature, is what we are put here, to rise above”. (You can buy my book- ‘Health and Happiness without Bullshit’ from Amazon.in)