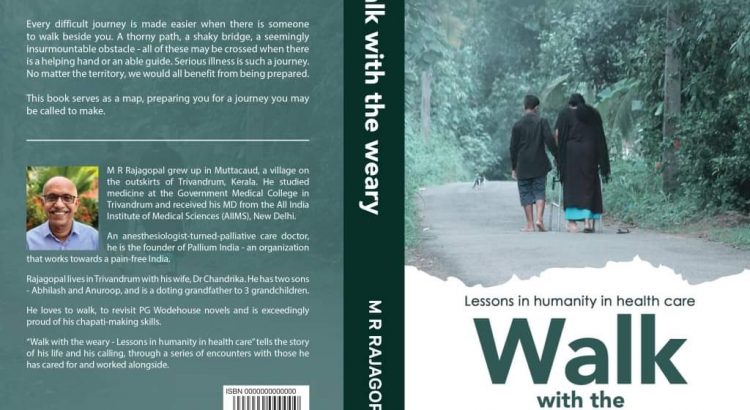 I barely knew Dr. Rajagopal. But I had worked in Calicut for my MCh in the opening decade of the millennium, and the Institute of Palliative Medicine was famous. His life’s work was not only that building I saw, but a people’s movement that has now spread all over the country.

Curative Medicine has made spectacular progress, even in our country. But, after one or two decades in there, the realist in me is struck by its limitations, especially in a country like ours. Most of us clinicians, have no sense of proportion. We often live in exalted orbits, inhabiting an idealized problem solving scientific space, while most of our people needing desperate care fall through the cracks of our system, writhing in agony. We close our eyes and minds to the enormous Jurassic monsters facing us every single moment of our sojourn- pain and death- while chasing rabbits and playing with squirrels. We can be pathetic.

Two years back, I had written a story- “Avarachante jeevanmarana yudham- vaidyashasthram thottathengine?”. After a week, I got a call from the great man. I was thrilled.

“I loved your story. Can you translate it into English for a wider audience?” said Dr. Rajagopal. How could I refuse? That was how “The battle of Ramprasad- how modern medicine lost” was born.

‘Walk with the weary’- Here is the gospel, from the man who started it all. From the man who taught doctors in India that pain existed, and that death was inevitable. Patients need not be ‘dumped’ because they had ceased to be a problem that can be solved. Inspiring, poignant, and sometimes humorous. Deeply, deeply inspiring in well written prose. Every doctor should read it. In fact, every human should.

He reminds us that doctors can cure sometimes and relieve often, but it is possible to comfort, always.

Always. And I hope I never forget it.(Jimmy Mathew)