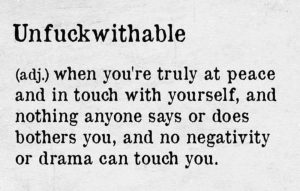 There a million memes flying around and this one gets my attention:

Unfuckwithable: (adj.) when you’re truly at peace and in touch with yourself, and nothing anyone says or does bother you, and no negativity or drama can touch you.

Now, my enemies will say this- your dirty mind will notice anything with the ‘fuck’ word in it. And I would become angry or irritated. In other words I will feel fucked with- I am not unfuckwithable.

I was in school, and I had a small, dark classmate. One of his legs was shrunken with polio. He always brought just rice and pickles for lunch, and his uniform was sometimes damp, as if it had not yet dried after washing.

He had a vicious tongue, and suffered from an inability to make friends and influence people. I don’t think he has read that book. Good for him.

Oh- he got picked on by bullies. In fact, once he was beaten mercilessly by a group of my friends, and I looked on, laughing. He ran some distance, picked up a few stones to throw, and shouted:

“No one can fuck with me; you assholes.”

But tears were streaming down his cheeks. He was not unfuckwithable.

We mocked his tears too.

We were. I mean- assholes. Human nature was fucking with us too.

It is the sheer unfairness of it, that gets me all worked up- or ‘fucked up’, if you will. You see, I was ‘unfuckwithable’ for a long time.

It is all a bloody trick- I tell you. A diabolical sham.

For fourteen billion years I was unfuckwithable.

Don’t ask me why there is something out there, rather than nothing; when it was so easy for nothing to be there. I mean ‘nothing’ is damn cheap.

But there was a ‘Big Bang’ they tell me, and there was space; and time- and absolute peace for fourteen billion years, when an unlikely series of domino falls made me fuckwithable- I was born.

I plonked out, twisting, crying, grimacing, naked- and cold. At the mercy of the world. The world fucks me every day, in every way.

The bloody unfairness of it that makes me angry. I didnt ask for it, for heaven’s sake. Nobody asked for my opinion. At the very least, someone should have said- “hey, you- are you ready to exist? It is not easy, buddy. Opt out if you want”.

No such basic courtesy.

Don’t misunderstand me. The world has treated me extraordinarily well. But that is useless. If the world doesn’t fuck me, I will fuck myself.

Let me explain. When I was a kid, I had almost everything. But someone called me fat, and I felt I was not tall enough. And that was enough to make me unhappy.

I was ok with studies, but the moment I topped the class in marks once, the temporary elation was replaced by the need to repeat the performance. I was mortally afraid of falling behind. Fuck!

When I got to study Medicine, I was rapturous. Just becoming a doctor was enough. But the moment I passed, I thought I would die if I didn’t get to do a speciality residency! Bloody hell!

I realize that my mind is designed in such a way that it can never be satisfied. In fact, each achievement and goal that I work towards, once I get them, raises my expectations, and I am left worse than before. All of humankind and the world economy run on this principle. Life is nothing but a series of strivings, each fooling us by shouting – ‘this is it! This is what we are here for.”

We are lead to believe that existence is everything, while in actual fact, it is nothing.

Meanwhile, the world warms and the ice sheets melt. Maldives will be under water in a century, and the world may crawl with similar refugees.

We are fucking up the world.

Other drives are more evil. They let us plunder, rape and kill. We divide and fuck each other. Where is ‘unfuckwithable’?

I realise there is hope. Every day, I notice. A grey hair, a small wrinkle. Suddenly, inside my nose, there are white hairs.

And I will finally, become-

The world will not miss a beat. No perturbation will disturb the fabric of space-time. The illusion that I am in any way irreplaceable- engineered by my brain- will cease.

The planet will warm, oceans will rise. North Korea will send nuclear warheads to space. Terrorists will blow themselves up, and millions will go about their lives, as if they can become unfuckwithable, while still remaining alive.

The Universe will go on existing, and sun will die, new suns will be born. The newest Data shows, I am told, that the expansion of the Universe is accelerating.

Everything will ultimately get diluted into darkness, and then, will something remain?

If something does, it will well and truly be: