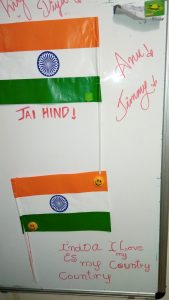 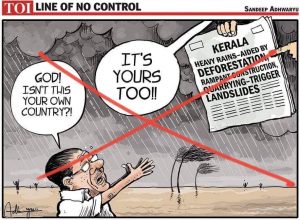 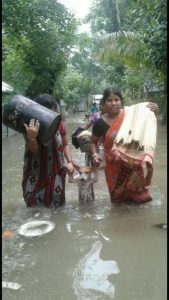 We had a flag hoisting ceremony on August 15, at our apartment complex. The rain was pouring. The flood was already under way. Still we sang ‘jana gana mana’, our National Anthem written in Bengali and stood at attention.

By night, it was a war zone. People trapped in buildings were desperately calling for help.

I went for work, wading through flooded streets, hoping that my car won’t stall. All elective operations were cancelled. The mother of a five year old, with cancer, burst into tears. They had come all the way from Gujarat, to have the surgery done. We get a lot of patients from all parts of India. Nearby hospitals were getting flooded, and patients were being transferred to our hospital. The situation was critical.

When I went back to my house on 16th, my apartment was still dry. Friends and relatives kept calling. Many had moved to safer places.

There, on the whiteboard in my house, was this art work by my eight year old daughter (shown in photo)- Jai Hind- she had written. “I love my country”.

Almost at the same time, I saw the cartoon by Times of India (shown). It speaks for itself.

Now let us look at a few facts:

There were two components to the disaster. The first one is a monsoon which brought 40 to 50 percent more rain than normal.

The factors that affect the Indian monsoon are not at all well known. But it is well accepted that it doesn’t depend on local factors. It is not clear how even global warming contributes to it. Some say that it decreases the monsoon. So, one is forced to the conclusion that it is merely a chance event. A forty percent increase can occur, on rare occasions.

The second factor is the low pressure climate event that followed. It brought 2 to 3 times more rain than a normal monsoon week. This, coming when all the dams are already full, and not really that accurately predicted, is a phenomenal catastrophe and an extreme weather event.

While many say, that global warming increases the likelihood of these; we are not the ones responsible for it. All mankind of the past 10000 years is. The large industrialised western nations are the ones chiefly to blame.

The cartoon blames the people of Kerala for their own misery. Kerala is one of the very few states in India that has actually increased its forest cover. (Almost 3 percent increase in just the last few years). While population pressure and commercial greed leads to questionable practices everywhere, it is particularly difficult to flout the rules in Kerala.

Considering all these, I would say that the argument that even 1 percent of it is man-made is absolutely shooting off ones mouth without any awareness or information. Dishing out Bullshit, otherwise known as blabbering. It is not at all befitting a prominent national media house.

As I write this, people trapped, and in rescue camps, are fighting for their lives. Nearly four hundred have lost their lives, and ten lakh people are displaced.

This has brought out the best in our people. Literally everyone is part of the rescue operation. The Army and the Navy are doing a commendable job, and it is re-assuring to be a part of such a large and strong country. Fisher folk from various parts of the state are out with their boats, some travelling hundreds of kilometres on Lorries taken out on rent. And they have used up their own money for that. Money earned by catching and selling fish.

Well- I don’t know whether I should say more. But let us go back a few years to those times when India got Independence. Other than Malabar, the rest of Kerala was under the Travancore King, and not under direct British rule. There were about 500 such semi-independent princely states in the subcontinent. The chief minister of Travancore was one C.P. Ramaswami Iyer and he prevailed on the King to declare Travancore an Independent state. “We won’t join the Indian union” – he declared.

All hell broke loose. The people of Kerala wanted to be part of independent India. Agitations broke out. State tried to crush these with brutal force.

One night, at a state function, a freedom fighter from the crowd, attacked Sir CP Ramaswami with a sword, and cut off part of his nose. Someone switched off the lights. The assailant’s lungi fell off, and it was collected and hid by one of the common men present. The attacker was never caught.

Ramaswami fled the State, minus the nose, and the King promptly declared that Travancore was joining the Indian union.

My point is, India is what it is because the people of India wanted it to be like this. It can continue to be, only if the people want it to be.

And I can see that it is good. For the past few days I have been getting countless messages from residents I have trained, and from colleagues all over India. As far away as Kashmir, Uttar Pradesh and Calcutta. Many states and the Centre have announced substantial packages for flood relief.

I am really sorry that a few bad apples like the TOI don’t get it. Some have started a campaign saying #godieTOI. I cannot agree with it. After seeing the love and support all around me, what I want to say to TOI is:

Thanks everyone and please support us in our hour of crisis. (Jimmy Mathew)