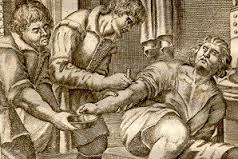 “Fu## you” That is what any modern Physician would say. He might sing:

“We don’t want no father figure…….

Neither do we, want beliefs and sacred texts….”

But he will NOT sing:

“We don’t want no education….

Hippocrates also endorsed the out dated practice of bloodletting. Physicians continues to do that till the 19th century. But no Modern Physician does it today, unless for some exceedingly rare instances

As the father is disowned, Modern Medicine is a bastard. The bastard works by the scientific method. Physics, chemistry, civil engineering and electronics are also bastards. In fact, science generally is bastardic. It has to be.

It all started with the ‘logic’ of Greek philosophers. Aristotle stated that thinking logically; men will have more teeth than women. The fact was accepted as conventional wisdom for over a thousand years before a few sceptics in the budding age of reason decided to count and see for themselves. I am sure there must have been lot of resistance to the idea. “What! Equal number of teeth? It cannot be!”

Experiment and observation- then inference.

In clinical medicine, there is little mathematical theorisation. So we might as well forget it. The only mathematics routinely used in clinical studies is Statistics.  And we cannot do without statistics.

Can we do experiments in clinical medicine? We can study the effect of drugs or chemicals in cultured cells or tissue systems in a test tube (in vitro). We can give medicines to or do surgery on or alter the diet or living conditions of experimental animals like rats and study the effects. This process can be done in human beings also, with strict guidelines, consent, ethical committee approval etc.

These experimental studies are called trials. A Randomised Controlled Trial (RCT) is the most reliable type of trial in which there is randomised allocation of subjects into groups that will receive one intervention and a different or no intervention. It can also be placebo controlled and double blind. Placebo is a benign substance or intervention that has no effect. It is given to the group that is to receive no intervention. Double blind means that neither the patients nor the medical scientists evaluating the study know which group receives which. Then bias can be minimised. RCT or a Meta analysis (Statistical evaluation of many trials) of many RCTs provides the highest level of evidence possible in medicine. It is by no means infallible however.

All medicines used now in conventional medicine, if it has to be approved and practiced widely, should undergo three phases of trials- In vitro studies, in tissue cultures, next one in animals, and the third one in humans, as described above.

In studies of lifestyle factors that influence human health and disease, and some other treatments,  trials have little role, or they cannot be done. Here we have to rely on pure observation only studies. Simplifying a bit, these are:

Case- control studies- To assess the factors leading to lung cancer, we can take a group of people having the disease and a comparable group of normal persons. Then we can assess how many smoked in each group, how many were exposed to pollution etc, and then compare the differences using statistical methods.

Cohort study- Here we follow-up an entire subset of population and assess characters and habits that might be relevant, on a continuous basis. Then we observe the diseases that develop in that population. Then do the same comparison. This is a better study design, but much more difficult to do.

Descriptive studies- In this we just note the diseases affecting a group, for example of obese people and then compare it with the general population of comparable characteristics.

Expert advice and recommendations of a panel of experts etc comes after these levels of evidence. These are the least reliable in scientific terms. But these are sometimes necessary to consolidate and evaluate the different study results. Conventional wisdom comes under the very bottom. Sometimes it is right, and sometimes not.

But conventional wisdom and belief are very important to human beings. Trust and empathy dominates the human world.

Modern Medicine is a BASTARD. It is a very SMART BASTARD.

But like all smart bastards, he can attain legitimacy in society by immaculate ethical conduct and principled behaviour.