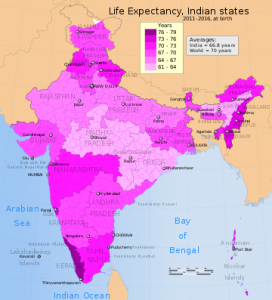 20 years back, I would have been described as middle aged. I am attending a conference of Plastic Reconstructive Surgeons in Kochi,  and many see me as part of the ‘younger crowd’.

Newspapers mirrored it, if you were thinking that I am merely being wistful. A 1980 newspaper report typically has a headline- “Middle aged man dies from an accident” – and underneath you find that a forty three year old was the unfortunate victim, while today I routinely read- “young man found dead” and find that the poor chap was forty five.

Most of the disease burden has shifted, from infections, to other diseases. All those fevers, epidemics, diarrhoea, pneumonia, meningitis, tuberculosis and leprosy, has diminished drastically in importance, thanks to vaccinations, antibiotics and timely treatment.

India’s  life expectancy improved from 59 in 1990 to 68.5 in 2016. A decade has been added to our lives! For a human, a decade is huge, huge. You can join as junior academic and become a full professor in ten years. One can enter the hallowed precincts of a Medical School and come out as a Reconstructive Plastic Surgeon (It takes slightly longer than that, actually J). A seven year old can join Medical School- in ten years.

I joined MBBS in 1990. It seems as if it was yesterday. Unnoticed by me, and by most of us, our collective efforts have quietly added ten years to our life span.

The most amazing thing about the increase in life span globally, is the fact that the increase, as of now, shows no signs of abating. It is pushing eighty and eighty five in many countries. The fact is we can, by effort, get one more decade for ourselves. We can improve further.

I am sure you know our life expectancy when we got our Independence in 1947? You don’t?

But, reading the report further, we can see some important things.

There are severe inequalities between the different states of India. The life expectancy for women in Uttar Pradesh is 66.8, while the Life expectancy for a woman in Kerala is 78.7. A stupendous gap of 12 years! Look at the Map in the figure.

Note that the average lifespan for the world as whole is about 71 years, while the United States if America has an average lifespan of 78.8 years. Kerala has the same avg lifespan as the US, while many of our states are far below world average!

The study found that while under-5 mortality was improving in every State, there was a four-fold difference in the rate of improvement among States, which again indicated health inequalities.

The per person disease burden(both infections and other diseases like strokes  and heart disease) has a five to ten times difference between the best states and the worst performing ones.

The Southern states are markedly better, and states like UP, MP, Rajasthan, Bihar and Orissa continue to lag behind.

Some of the points that we can take home from this report:

The improvements are due to scientific advances in Modern Medicine and science based public health. It is not due to hocus pocus and ancestral glory.

Tremendous improvement has been achieved, in spite of the fact that our public health spending is about 1 percent of our GDP, while many other countries, it is like 10 percent.

Each State in India is like a separate country. The difference in health mirrors deeper differences. We need radically different governance models for different regions of India. It is not possible to knead India into a homogenous whole, flatten it out and cook it like a chapatti to get a developed product; or a country. It takes careful work.